Here, we describe the structure of the NNPDF code and we present a high-level description of its functionalities. The workflow for an NNPDF fit is displayed in the figure below. 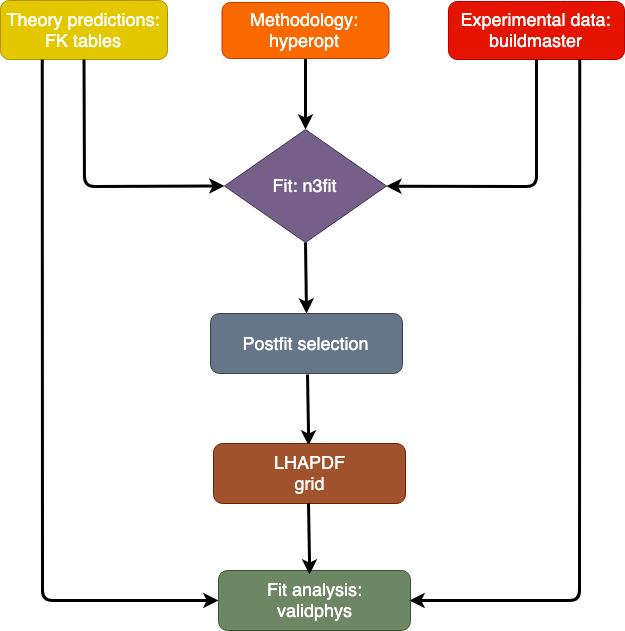 This code takes hard-scattering partonic matrix element interpolators from APPLgrid and FastNLO (for hadronic processes) and APFEL (for DIS structure functions) and combines them with the DGLAP evolution kernels provided by APFEL to construct the fast interpolation grids called FK-tables (for further instructions see How to generate and implement FK tables). In this way, physical observables can be evaluated in a highly efficient manner as a tensor sum of FK-tables with a grid of PDFs at an initial parametrisation scale \(Q_0\). APFELcomb also handles NNLO QCD and/or NLO electroweak K-factors when needed.

Theory predictions can be generated configuring a variety of options, such as the perturbative order (currently up to NNLO), the values of the heavy quark masses, the electroweak parameters, the maximum number of active flavours, and the variable-flavour-number scheme used to account for the effects of the heavy quark masses in the DIS structure functions. The FK-tables resulting from each choice are associated to a database entry trough a theory id, which allows to quickly identify them them.

A C++ code which transforms the original measurements provided by the experimental collaborations, e.g. via HepData, into a standard format that is tailored for PDF fitting.

This module implements the core fitting methodology as implemented through the TensorFlow framework. The n3fit library allows for a flexible specification of the neural network model adopted to parametrise the PDFs, whose settings can be selected automatically via the built-in hyperoptimization algorithm. These include the neural network type and architecture, the activation functions, and the initialization strategy; the choice of optimizer and of its corresponding parameters; and hyperparameters related to the implementation in the fit of theoretical constraints such as PDF positivity and integrability. The settings for a PDF fit are inputted via a declarative runcard. Using these settings, n3fit finds the values of the neural network parameters, corresponding to the PDF at initial scale which describe the input data. Following a post-fit selection (using the postfit tool implemented in validphys) and PDF evolution step, the final output consists of an LHAPDF grid corresponding to the best fit PDF as well as metadata on the fit performance.

As an implementation of the reportengine, it enables a workflow focused on declarative and reproducible runcards. The code implements data structures that can interact with those of libnnpdf and are accessible from the runcard. The analysis code makes heavy use of common Python Data Science libraries such as NumPy, SciPy, Matplotlib and Pandas, and through its use of Pandoc it is capable of outputting the final results to HTML reports. These can be composed directly by the user or be generated by more specialised, downstream applications. The package includes tools to interact with online resources such as the results of fits or PDF grids, which, for example, are automatically downloaded when they are required by a runcard.